Osteoarthritis: Difference in MRI features between the overweight and the lean patient

Is osteoarthritis a single disease, or could it be a collection of etiological distinct subtypes? Researchers from The Netherlands are using MRI to investigate this question. A study they conducted of overweight patients with osteoarthritis and lean patients who had developed osteoarthritis from physical activity has yielded the interesting finding that shows that MRI features of the disease are different in these two groups.

Research is suggesting that there are at least two subtypes: 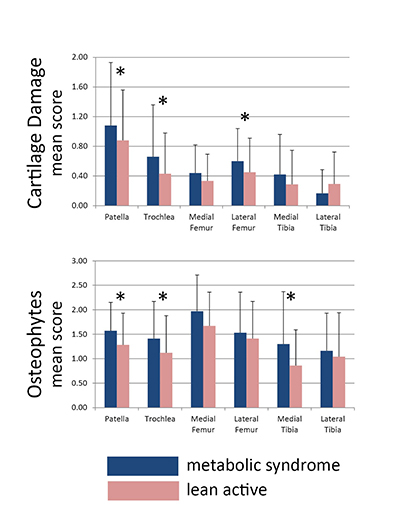 However, it is not known whether these two potential subtypes differ in how the disease manifests with respect to symptoms and structural degradation, according to co-author J.H. Waarsing, Ph.D., of the Department of Orthopedics at Erasmus Medical Center in Rotterdam, and colleagues.

Waarsing explained, “Although patients appear to consist of rather distinct subgroups, the question remains whether these clearly distinct patient phenotypes indeed lead to different diseases processes. It still could be that the disease would develop in exactly the same manner. Or, in other words, that the variation in osteoarthritis that we see is just ‘random’ biological variation and not due to distinct disease phenotypes. We hypothesized that if there are truly distinct disease processes at work, then this should lead to different patterns in structural degradation that can be observed with MRI.”

The study, published online in Osteoarthritis and Cartilage, evaluated two groups of 50 subjects each enrolled in the Osteoarthritis Initiative, an international multi-center longitudinal prospective observational study of knee osteoarthritis. The metabolic syndrome group of patients was significantly overweight, and also had two additional criteria that included hypertension, insulin resistance or dyslipidemia. The physically active lean group exercised between three and seven days a week and had a body mass index (BMI) of less than 25 kg/m2.

All participants had MRI scans at their 48-month follow-up date. Their features of knee osteoarthritis were assessed using the MR Imaging Osteoarthritis Knee Score (MOAKS). The researchers combined the 14 compartments of the MOAKS score into six anatomical plates, and the six meniscus compartments were grouped into medial and lateral compartments.

The authors reported that in the metabolic syndrome group, scores for cartilage damage were significantly higher in the patella, trochlea, and lateral femur. Osteophyte scores were higher for all compartments, and prepatella bursal signal, representing bursitis, was more prevalent.

Among physically active lean patients, Hoffa synovitis was significantly more prevalent. Meniscal tears were most prevalent in this group, although the authors reported that meniscal degeneration was seen in 80% to 90% of the knees in both groups.

Citing that their research was an exploratory study, the authors recommend that a larger study be conducted to determine if their results can be replicated. “If so,” Waarsing told Applied Radiology, “these findings might provide a key step in the better understanding of the heterogeneity of osteoarthritis. And as soon as effective disease modifying therapies are available, it will be important to know which therapy should be given to which subgroup. Also, when therapies are being clinically tested, it might be important to be able to identify a specific phenotypic patient group.”

Osteoarthritis: Difference in MRI features between the overweight and the lean patient.  Appl Radiol.